GARDEN CITY, NY – November 21, 2019 In celebration of the 50th Anniversary of Apollo 12 (Nov 14-Nov 24, 1969), the Cradle of Aviation Museum and Education Center was honored to welcome Leslie Bean, wife of beloved astronaut and artist Alan Bean, who gave a free public lecture sharing stories and insights into the astronaut’s life and artwork. Select reprints of Alan’s artwork are on display at museum until end of 2019.

Leslie spoke of Alan lovingly, how much he cared about people and how influential he was in changing lives. New astronauts would often seek out Alan’s advice, including Shuttle Astronaut, NY Times Bestselling Author, and occasional guest star on The Big Bang Theory, Mike Massimino, who was greatly influenced by Alan, growing close to the couple.  Massimino attended the lecture in honor and support of Leslie and Alan’s legacy. He acknowledged Leslie’s career contributions in advocating for patient’s rights and medical ethics at the University of Texas M.D. Anderson, Cancer Center in Houston. “They were always trying to help others. Amazing couple. A life well lived with career and life partner”, said Massimino.

Introduction from Mike Massimino
In introducing Leslie, Massimino shared, “Alan was an amazing person, aviator, engineer, astronaut, walked on the moon, but also an incredibl ly talented artist. I’ve never met anyone with those kinds of talents; that combination, to be a test pilot and astronaut at that level and an artist at that level.” He went on to describe Alan as  an “extraordinary individual, a very unique person, very kind and so loving. No matter who he was talking to, always so caring and loving. I try to live my life with that same spirit. Every minute was a special minute. He lived every minute to the fullest. He made everyone around him feel better about themselves. He was an inspiration for me. “ 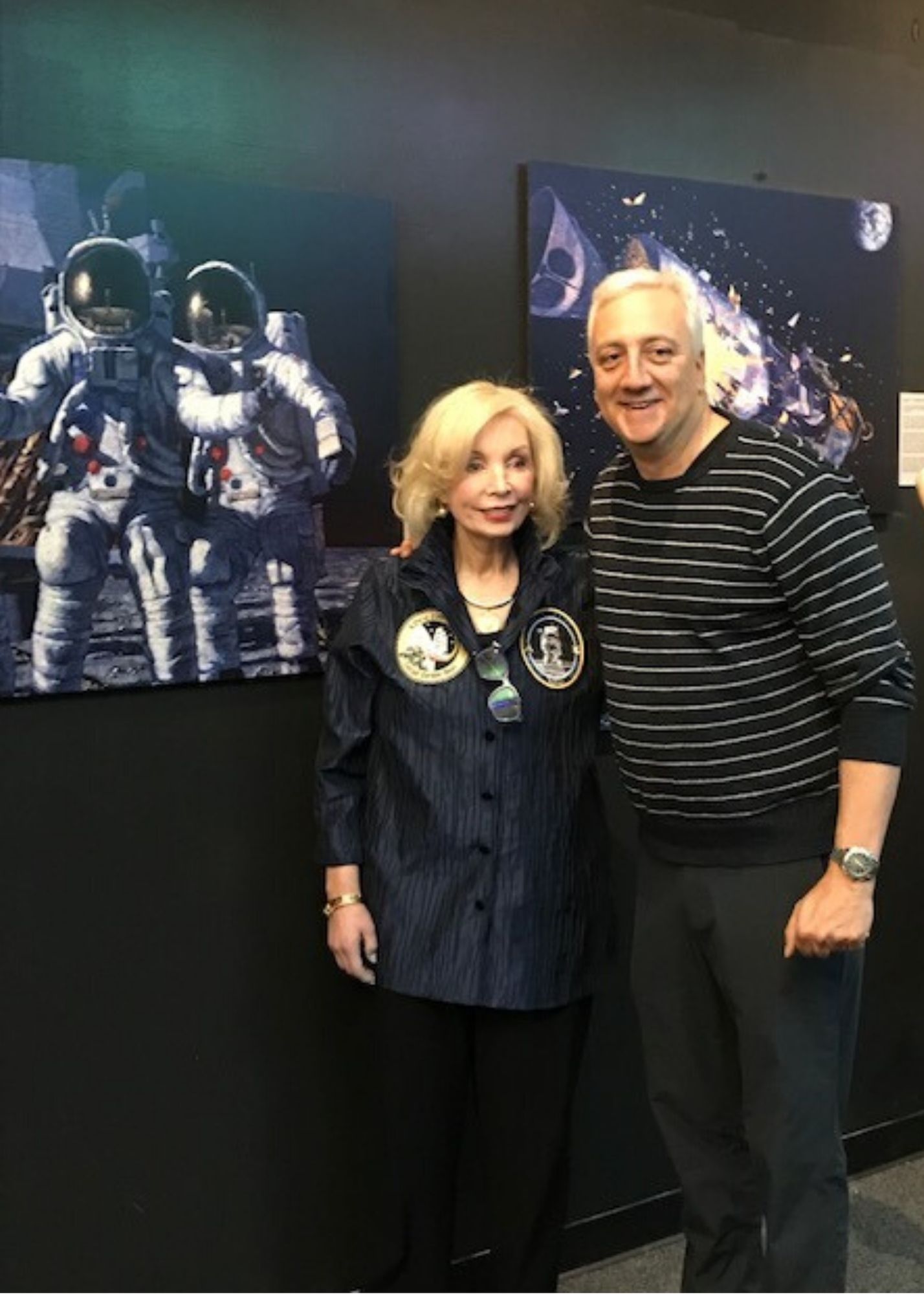 As An Artist
After leaving NASA, Bean, after much contemplation, pursued an art career full time. But Leslie shared, “He was always an artist. He always had the heart of an artist. Even as a child when he built model planes, he cared first about the beauty of the plane and the technical specs second. He just had an equal left and right brain.”

Leslie’s Favorite Painting
Leslie commented she was partial to “Gordon, Conrad, and Bean – The Fantasy”. stating “Dick Gordon (Command Module Pilot) never once complained that he didn’t get to walk on the moon. And they loved each other like brothers. Alan used his artistic licence and he painted Dick on the moon. I love that he painted Pete doing bunny ears behind Dick’s head.”

As a Husband
“Alan changed lives. I loved that man. He was a good man. He cared about people. I have a clip of of his laugh and listen to it every day. There is not a day where someone doesn’t tell me how he changed their lives. He always felt lucky and blessed,” stated Leslie. She recalled a memory of Alan serenading her,  “I’m painting the moon for you. I always painted for you.”

As a Mentor
Alan mentored many new astronauts including Mike Massimino and could quickly spot those who were different. “Everything he did was of love and respect. He would tell new astronauts, “Let me tell you what I did and what you shouldn’t do. He cared more about helping than his own image of himself,” stated Leslie.

About Apollo 12 Crew & Mission
“Pete, and Dick and Alan not only liked each other, they loved each other. These guys were magic together. They worked hard and were all smart, but they loved to have fun. She spoke about how the Apollo 12 near disaster was diverted. When Apollo 12 launched, it launched in a thunderstorn and got struck by lightning twice within the first sixty seconds, it knocked everything out. John Aaron, a 24 year old NASA Engineer from Mission Control told them to “Try SCE to Aux”. Leslie shared she was grateful to John and to Alan who remarked, ” I know what that is and know where that is. He flipped it and brought back panel.”

Leslie ended her lecture with the words Alan shared with Tom Hanks when he met Alan for research for Hank’s series.”In the end, what I have left of my walk on the Ocean of Storms are memories.  Almost like a trip to the sea shore, or a drive to the country, they mix together, in a constant stream of thoughts and images, and come and go like all memories do. The most precious memories are the things I brought back with me, the same things I left with, my two best friends. All that really matters is that you share the experience with people that you love. That’s what makes life special. Ultimately that’s all there really is.”

About Alan Bean’s artwork When Alan Bean returned from his Apollo 12 mission, he often found it difficult to describe the beauty of what he saw in space. Encouraged by his fellow astronauts, he began painting his experience on the moon, eventually becoming a full-time artist. “I was fortunate to be the first artist with the opportunity to be in the center of the action to capture what I saw and felt, and bring it back to earth to share with generations to come. It is my dream that on the wings of my paintbrush many people will see what I saw and feel what I felt; walking on another world some 240,000 miles from my studio here on planet earth. “ said Bean on a personal statement on his website. His artwork “evolved into a mixture of painting and sculpture, textured with my lunar tools, sprinkled with bits of our Apollo 12 spacecraft and a touch of moondust from the Ocean of Storms” said Bean.

“Is Anyone Out There?”

“Houston, We Have a Problem”

Leslie Bean has spent her life advocating for those who may not speak for themselves. She created and directed Patient Advocacy in the University of Texas M.D. Anderson, Cancer Center, co-founded the Clinical Ethics team, and other patient centered value-added programs, created employees morale program, and spoke nationally on dynamic conflict resolutions to create win/win outcomes. In a family statement after Alan’s passing in May 2018, Leslie said of their 40 year marriage, “Alan was the strongest and kindest man I ever knew. He was the love of my life and I miss him dearly.”

Bean was born in Wheeler in the Texas Panhandle, and grew up in Fort Worth. He dreamed of becoming a naval aviator and began his flight training at 17. He graduated from the University of Texas with a degree in aeronautical engineering. A test pilot in the U.S. Navy, Bean was one of 14 trainees selected by NASA for its third group of astronauts in October 1963. He flew twice into space, first as the lunar module pilot on Apollo 12, the second moon landing mission, (and the fourth man to walk on the moon) in November 1969, and then as commander of the second crewed flight to the United States’ first space station, Skylab, in July 1973. In total, Bean logged 69 days, 15 hours and 45 minutes in space, including 31 hours and 31 minutes on the moon’s surface. Bean retired from the Navy in 1975 and NASA in 1981. In the four decades since, he devoted his time to creating an artistic record of humanity’s first exploration of another world.  Alan Bean was honored at the Cradle of Aviation Museum with the Spirit of Discovery Award in November 2017, just a few months before he passed away in 2018.

About Apollo 12 November 14 – November 24, 1969. Launched just four months after Apollo 11, ‘Pete’ Conrad and Alan Bean performed just over one day seven hours of Lunar surface activity on the Moon’s ‘Ocean of Storms’, while Richard Gordon remained in Lunar orbit. Unlike Apollo 11, Apollo 12 achieved a precise landing at their expected location, the site of the Surveyor 3 unmanned probe. On one moonwalk they visited the old Surveyor and removed some parts for return to Earth for analysis. Currently on exhibit is Apollo 12’s protective cover from Navigation Sextant in Command Module, left in place when not in use.

The Cradle of Aviation Museum and Education Center is home to over 75 planes and spacecraft representing over 100 years of aviation history and Long Island’s only Giant Screen Dome Theater.  Currently, the museum is celebrating “Countdown to Apollo at 50” sponsored by the Robert D.L. Gardiner Foundation, showcasing Long Island and Grumman’s significant role in the Apollo program. The Museum was recently recognized and listed on New York State’s National Register of Historic Places as a significant part of American history. The museum is located on Museum Row, Charles Lindbergh Blvd., in East Garden City.  For more information call (516) 572-4111 or visit www.cradleofaviation.org.